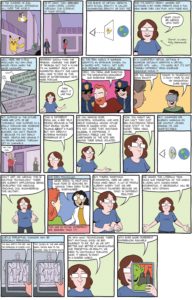 An interesting comic by the Boston Globe about AR

In recent years, developers have released many promising virtual reality features and experiences. Lately, I’ve contemplated how often I would actually leave my home once these devices reached my hands. After all, why walk around the sweltering heat at college campuses when I could peruse each building at my own leisure with a virtual tour guide through my VR headset? (*for more information, see our last post) Your experience can be customized in every way to your utmost desire. In short, virtual reality is the product of the world revolving around you.

That’s when I remembered the countless number of studies stating that social interaction is key for maintaining cognitive sharpness, and more importantly, happiness! Perhaps swimming around in my own virtual world the whole day wasn’t the best idea. So, I took my smartphone out of my headset and headed out into the great outdoors: five minutes away from my apartment. Little did I know, traces of my digital footprint still followed me.

Augmented reality (AR), brings the physical world back into one’s virtual life. The primary social media platform to utilize AR is Snapchat. Facebook, Twitter, and Instagram are mostly sustained by user participation through “likes” and “comments” by others online praising the content they see, whether it’s a funny tweet or a breathtaking photo. Snapchat, on the other hand, thrives on face filters, funny effects that appear on a user’s face, and geofilters, special headings that only appear on photos at certain real life locations. These selfies and photos are fun and fast, disappearing from a user’s story after 24 hours, creating a need to constantly post. 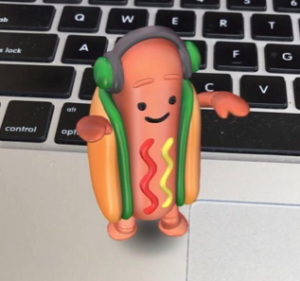 Another popular feature, Lens, has opened up even more potential for AR. In the summertime, users could generate virtual dancing hotdogs anywhere, even in the dining room, although it only shows up on their phone screen. On a larger scale, artist Jeff Koons is using Snapchat’s location-based features to display his art around the world. For example, if a Snapchat user viewed the Eiffel Tower through Mr. Koons’ lens, they would see his sculpture “Rabbit” right next to it. Additionally, users have the option to opt out of seeing “Rabbit”; the choice to view it is entirely theirs. This gives users the freedom to choose how to experience landmarks,whether accompanied by little statues or in their original form. 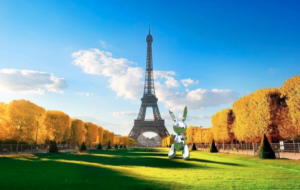 Naturally, there is cause for concern, as this newfound freedom gives people the liberty to view their surroundings however they please: for good or for worse. One prominent example brought up is political vandalism, which has been a growing problem in the modern political climate. The comic mentions the main difference between this activity in real life versus the digital world: A person can be held accountable for a Swastika plastered on a building in real life, but it’s much harder when the symbol is merely seen digitally. Damage done in AR feels far more real compared to hateful comments online because while comments are tied to a virtual account, AR is based on real life and real locations that can’t be erased any time soon.

Of course, not everyone using AR has malicious intentions. After all, millions of smartphone users got their first taste of AR catching virtual pocket monsters around the world when Pokemon Go launched nearly a year and a half ago. People gladly traversed through malls, towns and even small businesses in pursuit of these little creatures. However, there were still issues with Pokemon Go’s impact on real life places, such as the Hiroshima Memorial or the Holocaust Museum, but these problems were eventually rectified and noted for future AR developers. While it may not be as popular compared to its initial launch, the game is still played by many people around the world, and recently released a whole new region worth of Pokemon, just in time for Halloween! 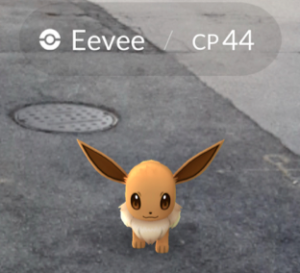 In short, augmented reality is powerful, bridging two worlds together in a time that many have neglected one or the other. It reintroduces real life places back into our screens and brings dancing hotdogs to the living room. So, what does your augmented reality look like?